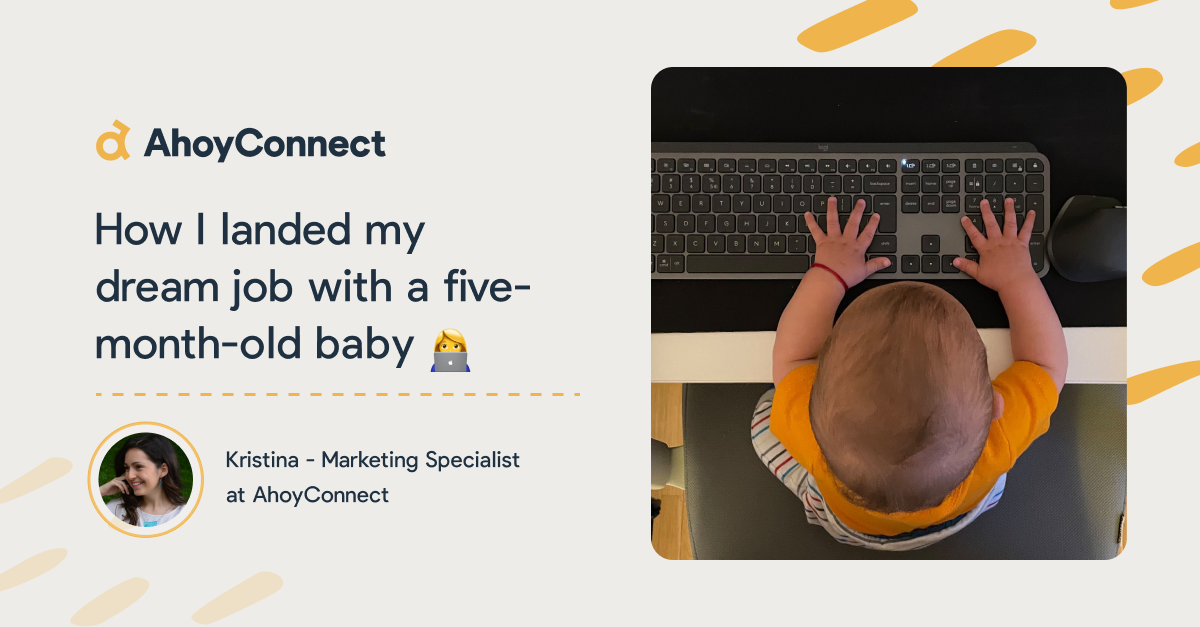 Being a fresh mom finding her way back to work can be challenging. Before my baby came along, I was confident in myself as a professional. But that confidence was shaken by the time I reached my due date.

Now, I see that my fear of falling behind in my career was misplaced. Maybe I got lucky, but after a week of looking and just three job applications, I started the interview process at @AhoyConnect, an early-stage startup that truly embodies the words "equal-opportunity employer."

When I got pregnant, I felt totally unprepared. I thought we'd have to try for at least a few months due to a minor health condition I had. But surprise, surprise! One month is all it took.

Back then I was in a great place careerwise. As a freelancer, I had the freedom to work remotely and was able to take on as many clients as I wanted. I hadn't given much thought to what I was going to do once I got pregnant – mostly because I was scared of how it would affect my career, which had just started taking off.

When I heard the news, I told my biggest client, and they were genuinely happy for me. Since I wasn't their employee, I didn't expect anything. We agreed that we were going to talk in a few months to see how we could work together in the future, but I had a feeling it wouldn't work out as before.

I continued working with them until month nine, then I hit pause on work to prepare for the baby. I had a lot on my mind, but the thought about when and how I would be able to go back to work crept in a lot too. I had heard stories from other moms about how hard it is to find a good employer or clients that take into consideration your need for more flexibility.

Life with a baby is the hardest thing I have done

After a wonderful pregnancy and a beautiful birthing experience, I was convinced things would keep going as smoothly. I had this precious illusion in my mind that once the baby came, he would have an established regime after the first month or two and sleep through the night. Back then, I couldn't imagine life with less than seven hours of interrupted sleep. 😵‍💫

A reality check inevitably came, and I realized how much harder having a baby is than I had ever imagined. Honestly, for the first few months, I thought that giving birth to the little guy was the easy part – and I had a drug-free delivery!

Eventually, things started to fall into some kind of routine. Alas, my baby is a real foodie, and I'm still waiting for him to start sleeping more than five hours at a time (as I'm writing this, he's nearly eight months old and still wakes at least twice to feed).

Looking for the right job

When my baby boy turned five months, I knew I wanted to start doing some work – not really because I had to, but because I felt the need to go back to my previous life at least partially.

I spoke to some of my old clients, but they had moved on with other people. That was expected, given that I wasn't their employee, but it still felt as though having a baby had cost me the work success that I had worked so hard to achieve. That's when I started browsing jobs without any real expectations.

Since I wasn’t in a hurry, I was determined to find a job that ticked all the boxes. Once again, I was surprised at how fast things happened.

A match made in heaven

When I started applying for jobs, I was picky. I applied for just three jobs in one week, but I only really liked one. When I read the job description for the Marketing role at @AhoyConnect, I got excited. For me, it was a perfect match.

I was nervous due to my situation as a mom with a young baby, so I decided to start the conversation by addressing it right away. Zbynek, AhoyConnect's Talent Lead, has this super positive and chill energy that made me feel comfortable. He reassured me that this wasn’t an issue. From there onward, the conversation felt relaxed, and I had a great feeling after it.

The interview process continued with two more rounds, during which the topic was just briefly brought up. It felt like it wasn't a big deal for the Marketing Manager Liv, nor the CEO Tomas. After the final interview with Tomas, I was thinking, "Wow! I guess I'm really going to land that job." I honestly couldn't believe my luck.

My surprise was even greater when I received the job offer. They agreed that I could start part-time to get used to combining my two new roles and then transition to full-time once both sides were ready. As I found out later, AhoyConnect originally wanted this position to be rather full-time right from the start. The great fact is that as we clicked so well, they went the extra mile and created a flexible job offer to accommodate my situation. Now that's what I call a true equal opportunity employer!

I mention a lot that I've been lucky, but the truth is there are more companies like AhoyConnect out there. Here I'd like to give a little shoutout to the founders of the first startup I worked for, Timo and Branimir, who hired me at Apzio without much experience years ago and taught me so much.

They are another example of an equal-opportunity employer that I want to include here to stress that it's not just about luck. Companies like AhoyConnect exist, and I'm positive more will follow such policies and be as open-minded and inclusive.

A culture built on trust and flexibility

After a few months at AhoyConnect, I'm happy to say that I moved to full-time recently, and I feel great about it. The company culture is built on trust, where the results and deliverables are more important than time spent in front of your computer.

I feel rewarded when I'm able to focus and be super effective with my tasks, so I can finish a bit earlier and spend time with my son. It's also great that there's no fixed working time, and I have the freedom to get things done on my own time – for example, very early in the morning while my still-childless colleagues are blissfully sleeping.

Snapshot from our last all-hands featuring part of our team. Sometimes you can even attend a meeting while taking care of the baby. 😊

My work-baby balance survival kit a.k.a. My tips for other working moms

For any new moms out there that are thinking about returning to work, here are some tips that have helped me find balance and success in both roles.

Bed-sharing with the baby is a lifesaver if you breastfeed!

I get asked a lot how I manage to stay sane with so little sleep, let alone use my brain for work. After giving birth naturally without any medication, I'm convinced that our female bodies are capable of anything.

After a few months, I actually adapted to sleeping for smaller chunks of time. As long as the total amount is around seven hours, it’s all good. What made a huge difference for me as a breastfeeding mom was bedsharing. After extensive research, I realized it’s perfectly safe in our situation.

Having help is a must

Not only is my husband Damyan helping out a lot with household chores and cooking (which is always super delicious), but I also managed to find a wonderful babysitter that my son absolutely loves.

I must admit I was anxious about me not being the one spending all the time with him, but I see how it's good for him to have other people around too. Plus, instead of the short 30-minute naps he had before turning six months, he now sleeps around three hours during the day, all of which while the babysitter is here. So he still spends a lot of his waking time with mommy.

I try to go to the gym twice a week to boost my energy levels. I'm not trying to achieve any results as I literally can't gain any muscle mass anyway (breastfeeding burns around 700-800 calories alone).

I go for short 30-minute workouts to move my whole body. This helps me feel refreshed and improves my mood and concentration.

Proudly wearing AhoyConnect while going to the gym. 🤸🏻‍♀️

As strange as it sounds, I feel more productive as a working mom than before I had the baby. While it's true I sometimes get things done at weird hours, most of the time I know when my babysitter is coming, and I plan my work for the hours she is here. Since I know that's the time dedicated to work, I get things done faster with fewer distractions.

And the biggest perk of all is ...

And this is a big one for me – I can be around when my baby needs me. Teething or any other kind of discomfort is easier when mom's around. I can go and hug him, and he calms down. Being able to have that as a working mom is a godsend!

While I started working earlier than what is considered normal in my part of the world, I know that in the long run, I can be around much more (not just in the first year or two of my boy's life). A job like the one I have at AhoyConnect makes this possible, and I hope this becomes the case for many more moms around the world.

Being a fresh mom finding her way back to the workforce can be challenging. Before the baby, I was confident in myself as a professional but that was pretty shaken by the time I reached my due date. Now I see how my fear of falling behind career-wise was in vain. Maybe I got lucky, but in 1 week's time and just 3 job applications, I started my interview process at @AhoyConnect. An early-stage startup that puts meaning into the words "equal opportunity employer".